3Rs for the People

This article first appeared in the May issue of Laboratory Animal Science Professional. Download article pdf

I’m not from this industry. I didn’t go to veterinary school or get a certification as an animal lab technician or, frankly, even know the lab animal science industry existed until three years ago. As with any new job, you try and learn all the things–the jargon, the acronyms, the nuances, the motivations–and as with any new job, it takes time for those things to shift from memorized pieces of data into useful, applicable nuggets of information. And so it was with the 3Rs.

Did I know what the 3Rs were? Of course! I’d been an advocate of recycling since I was a kid. I’m pretty sure Reading Rainbow or Schoolhouse Rock or Mr. Wizard told me it was a good idea. Save the planet. Stop the tears. “No,” I was told. “Replace. Refine. Reduce. The 3Rs of animal welfare.” Oh.

I’m incredibly fortunate to work alongside colleagues who, unlike me, are from this industry. They intended to make a career out of working with animals used in research, and they have. They’ve spent time banging cages, scruffing, dosing, assessing, and caring. I didn’t need consumer research to tell me what life is like on the inside; I had my very own focus group able and willing to answer any question I had just two doors down. That’s where my learning began.

Three years ago, I created buyer personas for our company — fictional people that represent customer types. I gave them proxy titles, salaries, families, locations, degrees, interests, social media networks, and names. The one persona that gets a lot of attention around here is Research Assistant Maria. Maria is an animal lover and always has their best interests at heart. She's early in her career and isn't sure if this is the right path for her, but she's a hard worker and thankful to have a good job with solid benefits.

While employee turnover is high, if she sticks in this field, she will become a supervisor of the vivarium someday. Maria doesn't always have the best tools or even the right tools to do her job, but she will figure out a way to get it done. She isn't a desk person, and won't travel, but she will attend a local trade show and is open to learning about products that can make her life, and the life of her animals, better. She is somewhat of a loner and won't spend much time on like-minded social media groups, but she will read whatever AALAS publishes, as well as any publications that are lying around the office. She may be solitary, but she likes to see imagery that reminds her of her. Maria is hands-on with animals daily. She is on the front lines. Maria is the one that is most passionate. Maria cares about the 3Rs not because the IACUC tells her to, but because she is hands-on with the animals every day, and it’s the right thing to do.

The 3Rs Means People Welfare Too

I’ve read a lot about why we are supposed to care about replacing, refining, and reducing and how it’s better for the animals. And it undeniably is. But what has begun to resonate more with me is not just how the 3Rs is good for animal welfare, but how the 3Rs is good for people welfare. And that’s when I go two doors down, or when I think about Maria, and I think about the business that I’m in and the products that we make, and I get fired up about what I do.

You see, Maria cares about the animals in her care. When she doses a rat and accidentally perforates the esophagus with a stainless-steel feeding tube, it’s traumatic. We’ve had customers call us in tears when things go wrong, looking for someone to help, someone to listen, someone to make things better next time. When Maria pokes a mouse or snips a tail, it hurts. The pain is real. Those long days sweating in PPE garb breathing in the recycled air of hot, humid, stuffy vivariums are grueling. And Maria cares. She takes those emotions home with her. To her dinner table. To her family. To bed with her at night. And she wakes up the next day and does it all over again.

You may have seen some folks walking around the last AALAS national meeting with “Be Nice” pins on. You also may have noticed there’s no logo on there, no brand name. That’s because it’s not a marketing campaign for us. It’s just what we believe. Be Nice. We’re a big proponent of flexible feeding tubes for oral gavage. They’re friendlier on the animal, and friendlier on Maria. We believe in poking as little as possible, because poking hurts. We believe in hands-off blood sampling and infusion because it’s less stressful for the animal, and less stressful for Maria. We believe in all those 3Rs refinements not just because it’s the right thing to do for the animal, but because Maria works two doors down from me. I eat lunch with her. I know her kids. A happier Maria makes for good business, and for good people.

I’m not from this industry, but I’m part of it now. And for as long as I’m here I’m going to continue to be driven by doing not just what is right for the animals, but for the people. 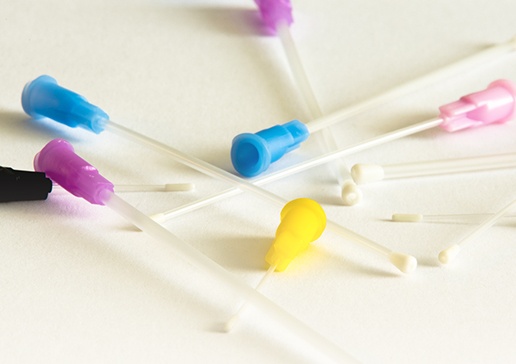 Guide to Oral Gavage for Mice and Rats